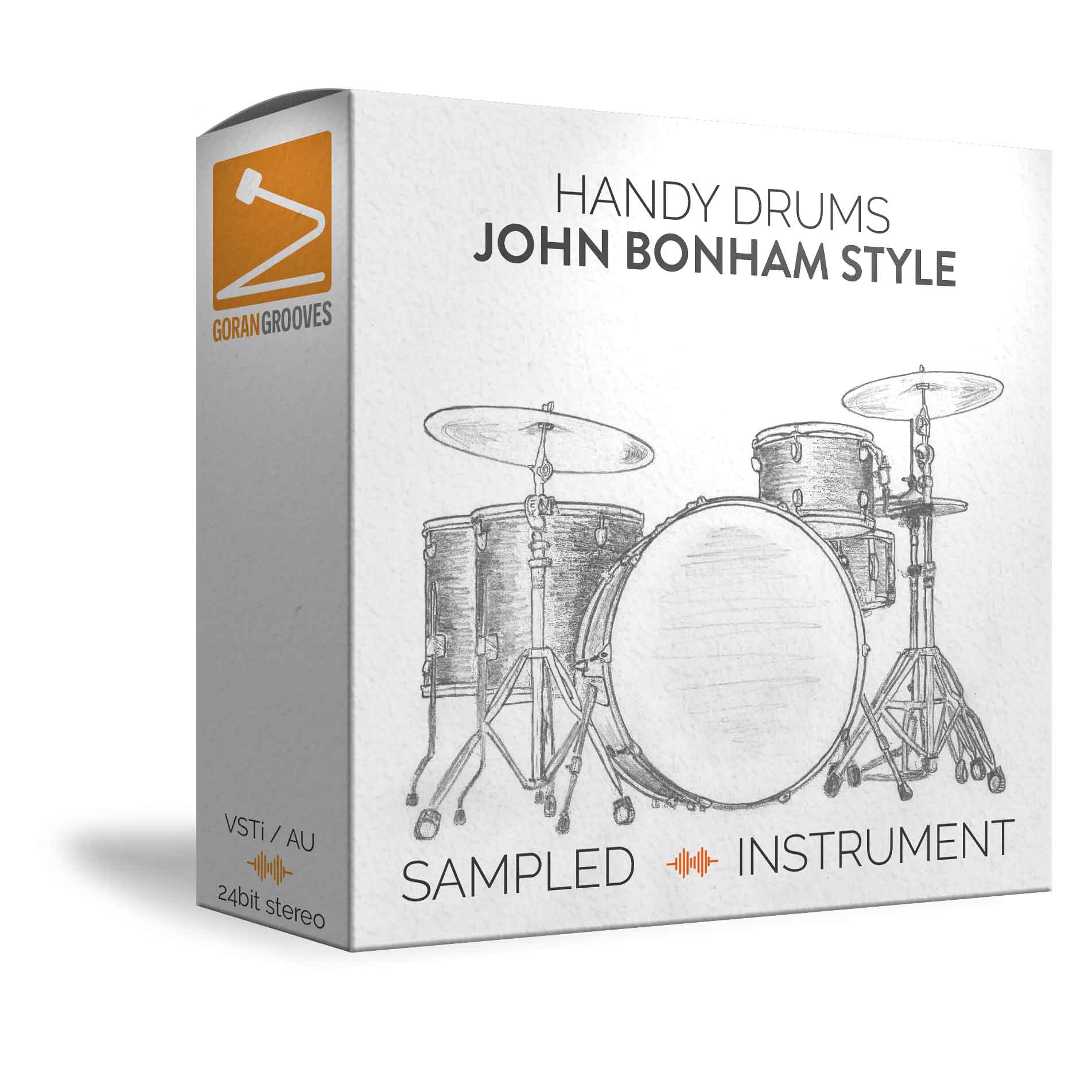 Snare has a woody sound with a musical “crack” as part of its natural attack.

The 28″ kick is so massive sounding that you can literally feel the whole room shake. This was carefully captured with a series of room mics for a fully immersive listening experience. The result is that you can really hear a wide stereo image from the kick itself, yet the bottom end is well centered.

With this release, we pay tribute to the great legendary rock drummer, John Bonham, who made his legacy not only with his incredible feel and deep grooves but also with his drum sound. The “Bonham” drum sound is characterized by large, open drums captured in a realistic way.

We sampled a large vintage ’71 Ludwig kit with a natural ambiance. As with most of our other kits, no artificial reverb was added. We were aiming at capturing the essence of the “Bonham” sound while utilizing modern production techniques.

This kit is a great alternative to the Rock Standard drumset but would also be at home for any acoustic, singer song-writer-style track as one example. Due to its large, all-enveloping roomy kick, it could find great use as a base in modern R&B (think Umbrella, One Thing, etc) or even Hip Hop. Try some saturation in the post and it opens a whole new number of styles it will make a solid foundation for.

This product is included in the Producer Collection plugin bundle.

When the budget is tight, but you need realistic-sounding, professional-quality drum tracks for your project, Handy Drums are here for you.

With stunning drum sound, mix-ready right out of the box, Handy Drums are the most practical, professional virtual drum instruments for your recording project.

What if you could hire highly professional and experienced recording and mixing engineers to focus only on replicating a legendary classic drum sound for your track at no extra cost giving you the freedom and time to focus purely on your music? With Handy Drums John Bonham Style plugin, you get just that in a box!

We invested hours upon hours carefully replicating, editing, and mixing these classic drums from multitrack recordings, so you don’t have to.

Achieving a fantastic drum sound takes significant effort, even when you are highly skilled for the task and have the best quality drum recording to begin with.

With just the right blend of close mics, overheads, and room mics, expertly sculpted for a robust, punchy, natural-sounding drum set, it will sit right into your mix!

Every kit and percussion setup has a very balanced sound–not too hyped and not too dry.
– RECORDING MAGAZINE

Without exception, the kits sound really good; this is mix‑ready stuff with a minimum of fuss.
– SOUND ON SOUND

EASY TO USE AND MANIPULATE

EASY TO USE AND MANIPULATE

Load the drum plugin, drop in your favorite midi drum groove, and you’re off!- ready to rock! We did the heavy lifting for you—a finished drum sound right out of the box. You are free to focus on the musical aspects of the drum track.

Handy Drums reminds a bit of the Drummer VST baked into Apple Logic Pro. Namely, there is a similar simplicity and immediacy to the results.
– RECORDING MAGAZINE

I could easily imagine a Handy Drums instrument making a no‑fuss sound module, whether in the studio or live.
– SOUND ON SOUND

Drum sounds behind the hit drum machine are here for your DAW!

Goran Rista, the producer of Handy Drums, used the same meticulous recording and production techniques he did for BeatBuddy’s original drumsets, an award-winning, best-selling drum machine.

The revered drum sounds that have made the BeatBuddy such a hit with live performers are now available in their expanded versions for your recording needs.

Also impressive was the John Bonham Style kit. No, it’s not quite ‘When The Levee Breaks’,
but it has a more ambient sound and makes a great rock choice.

The John Bonham kit sounds appropriately huge and authentic to the legendary Bonzo style.
This plugin delivered the iconic sound and brought a smile to my face.

We believe that your budget should not influence and stifle your creativity. Everyone should have the best tools possible available to them and allow their creativity to make the difference and be the only limiting factor in making music.

That is why we priced the Handy Drums range to be affordable to anyone. These virtual drum instruments are the best value you’ll find anywhere.

…they are an absolute steal given just how good they sound.
– SOUND ON SOUND

No more pain trying to work out if your sample bank is compatible with your sampler, or finding out that you need a costly full version of sampler, or dealing with inconsistent updates that may make one or the other outdated, or any other numerous complex and expensive issues that could arise when needing an additional sampler when all you want to do is get working on music.

Like all our Handy Drums plug-ins, the JOHN BONHAM STYLE drumset is self-contained and comes with multiple powerful samplers built-in. Load it like any standard VST/AU plugin or a stand-alone app.

This saves you a lot of money and time as you can be up and running in minutes.

No more pain trying to work out if your sample bank is compatible with your sampler, or finding out that you need a costly full version of sampler, or dealing with inconsistent updates that may make one or the other outdated, or any other numerous complex and expensive issues that could arise when needing an additional sampler when all you want to do is get working on music.

Like all our Handy Drums plug-ins, the JOHN BONHAM STYLE drumset is self-contained and comes with multiple powerful samplers built-in. Load it like any standard VST/AU plugin or a stand-alone app.

This saves you a lot of money and time as you can be up and running in minutes.

Use them as they are or as a starting point for your own grooves.

Pair Handy Drums with one of our Handy Grooves, MIDI drum loop packages for an instant WOW. All of our midi drum loops have been produced by world-class drummer-producers and tailored to work specifically with Handy Drums plugins.

Pairing the Rock Drums MIDI pack with the John Bonham kit sounds great and gets you right where you need to be in building a rock tune.
– RECORDING MAGAZINE

Unless you are a dab hand at programming your own drum parts, these are a great complement to the instruments themselves.
– SOUND ON SOUND

Handy Drums do not require a complicated manual to use. An elaborate design of over 50 samplers and smart algorithms power your seamless experience behind the simple user interface.

Each drum and cymbal was sampled at multiple dynamic levels to ensure the instrument’s fullest dynamic range when played back. Handy Drums Vintage Ludwig contains up to 11 dynamic levels.

The samples respond accordingly with a very realistic sound and response.
– RECORDING MAGAZINE

Throughout our tests, we never noticed any clipping or struggling to keep pace with our shifting tempo, even when aggressively swinging between extreme bpm and more leisurely paced plods.
– COMPUTER MUSIC

Up to 10 samples per dynamic level

When a drummer strikes a drum, each subsequential stroke is ever so slightly different from the one preceding, no matter how consistently they are played. That’s why our ear can instantly tell the difference between a roll played by a real drummer and a single sample being looped.

Each drum and cymbal has been sampled numerous times at every dynamic level. During a playback, no sample is repeated sequentially, but a different sample is triggered.

This culminates in the impression of a drummer hitting each drum with minor variations each time. Something many other ‘realistic’ VIs never quite nail.
– COMPUTER MUSIC

All Handy Drums samples come in 24bit format for the ultimate resolution and sound quality.

To achieve larger-than-life yet completely natural-sounding drums, every step of the sampling process is critical. Starting with the drum tuning, drums were carefully treated before even a single note was played.

They are captured using the highest-quality mics, preamps, and converters to preserve every minute detail.

Sound so natural; you can almost touch them!

Handy Drums sound like an actual drumset being played right in front of you in a room instead of a bunch of individual drums sounding in their own isolated spaces.

We achieved realism by recording the full breadth of acoustic drums and their natural ambiance, then meticulously edited and mixed them in the post-production.

The sound is very much like you are listening to the drums within a beautifully treated, compact studio room.
– SOUND ON SOUND

While the Handy Drums come pre-leveled between components, you still have an option to tweak and automate individual drum components to suit your mix. More kick or snare? No problem.

Use your favorite compression, reverb, EQ, distortion, or other FX plugins to further manipulate Handy Drums’ individual components. Output each drum component to any of the available eight stereo subgroups and independently process them.

An acoustic hi-hat is a complex instrument in its own right. Handy Drums’s variable hi-hats utilize the full range of sampled hats from tightly closed to closed, 25% open, 50% open, 75% open, and 100% open, for both tip and edge sounds.

Despite these 12 types of articulations, multiple dynamic ranges, and round robins, you can seamlessly switch from one to another using only TWO notes and a CC4 controller.

This approach streamlines something that was previously more of a time sink of assigning notes to each articulation.
– COMPUTER MUSIC

…the hi‑hat mapping is nicely done, providing plenty of control over the degree of closed/open status of the cymbals.
– SOUND ON SOUND

In addition to variable hats, standard open/close/foot hats are also included for better compatibility with GM drum loops. As a bonus, included is foot splash hi-hat articulation on B1.

For e-drummers who want to use Handy Drums, you can adjust your hi-hat foot controller curve. The curve is particularly beneficial for drum modules that do not output the full value range from 1-127.

Quickly preview the sounds of the drumset by clicking on the icons. They will play at random velocities.

Make the high-definition interface as large or as small as you need to suit your computer monitor best.

In a perfect world, there would be no need for drum replacements. Unfortunately, as producers or sound mixers, we are sometimes handed drum recordings of substandard quality, so to rescue the mix, drum replacement becomes essential.

This sampled drum instrument makes for an ideal drum replacement contender. If your DAW can extract transients from an audio recording, it is a simple task to create a MIDI track from it and rout it to Handy Drums instrument. Instant punch and presence!

Alternatively, you can use a dedicated drum replacement tool such as appTrigga3.

Goran Rista is a professional session drummer and producer based out of Miami, FL, and founder of GoranGrooves.com.

He has produced over 25 virtual drum instruments, and over 13,000 midi drum beats and drum fills, making him one of the world’s most prolific drum loop producers.

Goran’s drum set libraries and drum loops are used by over 85,000 musicians and producers in both live and recording settings.

Ready to get grooving?

Sort By Date
Filter- Genre
All Genres
To Top